Fresh Blackberries, a part of…

You may have heard that little George Washington refused to tell a lie about chopping down that cherry tree but did you know that his favorite fruit was the blackberry?  When President Washington moved to Mount Vernon, Virginia in 1761, he cultivated acres of blackberry plants along with other fruits and vegetables.  Blackberries, low in fat, carbohydrates, and calories, are high in fiber, vitamins, minerals, and antioxidants.  These yummy nuggets of flavor not only contribute to overall heath, but may even help prevent cancer and heart disease, as well as slowing the aging process.

A great American poet, Walt Whitman once wrote that the blackberry “would adorn the parlors of heaven”.  Not only are blackberries plentiful and beautiful to the eye, they are delicious and good for us.  Recently, nutritionists and the medical community have examined the blackberry as a possible nutraceutical, a food that provides medical and health benefits beyond basic nutrition, including prevention and treatment of disease.  The anthocyanins in blackberries are the pigments that give blackberries their deep purple to black color.  As an antioxidant, anthocyanins are linked to improving vision, improving circulation, preventing cancer, controlling diabetes, and preserving memory and motor skills by grabbing up free radicals before they deteriorate our bodies.

We’ve shared this planet with blackberries since ancient times.  Archaeological digs in Ireland, Denmark, and England show that blackberries were important in diets of the Vikings, and their teas were a mainstay in ancient Roman dispensaries.  The blackberry leaf was also used as an early hair dye, having been recommended by Culpeper, the English herbalist, to be boiled in a lye solution in order to “maketh the hair black.”  It is also said that wild blackberry plants sustained the pilgrims during the harsh winters in the new country before their first crops came in.

A small, sturdy, black, handheld e-mail device was designed in 1999.  Two years later, the device still had no name so the designers hired a marketing strategy company to find an appropriate name of this small black device.  After much brainstorming, someone noticed that the keys looked like seeds and named the device Blackberry.  Now, our blackberries can’t send emails, but they can provide you with delicious bits of flavor, antioxidants, vitamins and minerals to fortify you while you spend endless hours working on your electronic devices that may or may not be named after fruit. 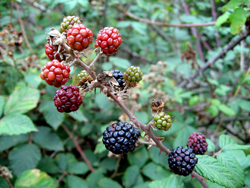 The USDA says that a single cup of blackberries (weighing nearly 140 grams) has only about 62 calories. This amount will give you 50% of your daily requirement of Vitamin C, as well as 32% fiber, 9% folic acid, 5% iron and 4% calcium.

Blackberries are delicious in: